Difference Between BSP and BSPT

Home Difference Between BSP and BSPT

Check Difference Between BSPP, BSP and BSPT Thread for a leak-free system

The bsp thread is defined as the British Standard Pipe, and it is commonly used in Europe, Australia, and several commonwealth nations. It is a set of technical standards for screw threads which are internationally adopted for connecting and sealing various pipes and fitting. It uses the process of an external male thread with an internal female thread. Bsp basically includes two types of threads, which is bspp- straight or parallel, or bspt- tapered.

Bspp has threads that have a straight shape and it has the same width all the way along. It consists of a bonded seal ring, which helps to create a strong seal that would secure the connection.

Bspt is British Standard Pipe Tapered. It can be described as an internationally adopted tapered thread that is primarily used for interconnecting and sealing various piping solutions. 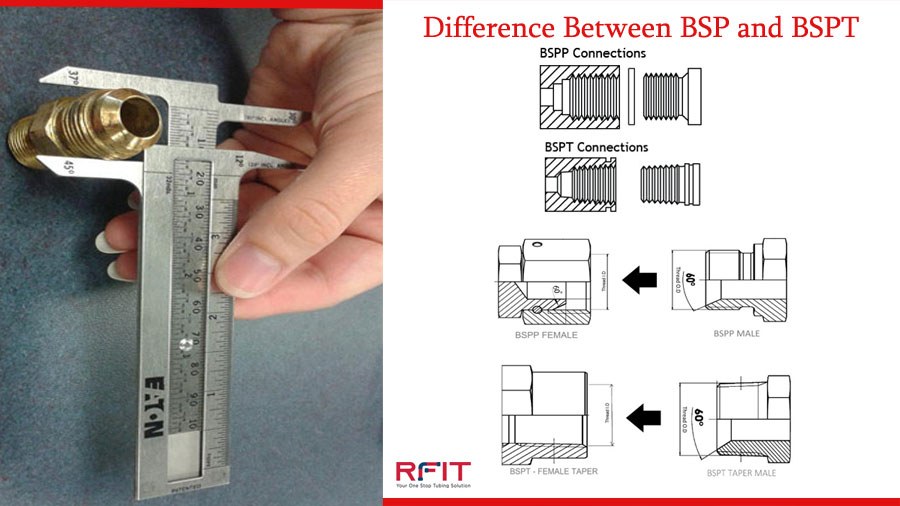 For bspt  thread, the diameter of the thread varies with its length. Here, the pressure of the bspt thread is responsible behind the tight sealing it offers. The standards for the bspt threads would include EN 10226-1, ISO 7.1, BS 21, DIN 2999, and JIS B0203.

Thus, the primary difference between bsp and bspt is in its tapered design thread. The bspt is quite similar to npt, but there are important differences between them too. The angle across the thread flanks is 55 degrees for bspt, instead of 60 degrees, which is found in npt. This is the same reason why bsp is not compatible with npt and thus, both of them cannot be used together.

The main difference between bspp and bspt is in the type of thread they have, even though they are from the same bsp family. Bspp has parallel or straight thread whereas bspt has tapered thread, with an angle of 55 degrees for the flank of the thread. Now that the difference is explained, it is also essential to know whether bspp thread is compatible with the bspt thread. This is confusing for many people, but you would get the hang of it if you understand the golden rule-, a tapered male is compatible with a tapered or a parallel female. However, the bspp male thread will only fit a bspp female thread, and it is incompatible with a tapered thread.

The bspt compression fitting are used in a wide range of industries, like the gas line in refineries, and also the electric conduit system. They are easy to assemble, and offer reliable leak proof connections. The bsp compression fitting are quite cost-effective too, and they come with high-pressure and temperature ratings. They are made of metals like stainless steel which can effectively resist corrosion.

Are You looking for Bspp Compression Fittings Benefits ? find here

The benefits of bspp compression fittings would include:

Dont forget to check what precaution should take in order to make BSPP compression fittings leakage-free ?

However, it is important to take into account important considerations so as to make the connection proper. In order to make it leakage-free, do not overtighten the fitting. This can cause damage to the olive or the tube itself. When the nut stops rotating with a considerable force, the tightening process should be stopped then and there only. Also, depending on the environment where it is to be used, it is essential to select the right material for the fitting.

Things that are prone to general corrosion or stress corrosion cracking should be avoided. Instead depending on the industry where it is to be used, different grades of stainless steel can be employed for manufacturing the compression fitting. Thus, whether using a bsp, bspp, or a bspt compression fitting, it would give you a cost-effective, reliable, and easy to assemble solution.

Have any Questions? Call us Today!